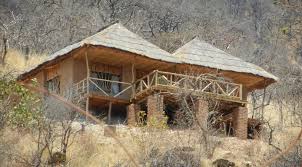 Ruaha Sunset Lodge: located outside the park  nestled in Idelemle mountains only 16 km away from the park boarder boasts of its tranquility and hospitality. The 11 self-contained chalets overlook a vast expanse and offer comfort, relaxation and a wonderful nature experience. The rooms are overlooking a vast tropical huge lawn of indigenous trees to the horizon, with a magnificent view of the sunset and a rewarding view of animals.

All the structures are styled after an African village concept with African ambiance. Great care has been taken to ensure

Vuma Hill Tented Camp: 16 tents comfortable furnished comfortable & specious room with old fashioned colonial décor with en suite bathroom facilities & shaded wooden veranda at the front. Sleeping under canvas at Vuma is a far cry from the discomfort usually associated with camps. Complete at the back there is not much more to be asked for.
There is ramped access to the main areas, swimming pool. 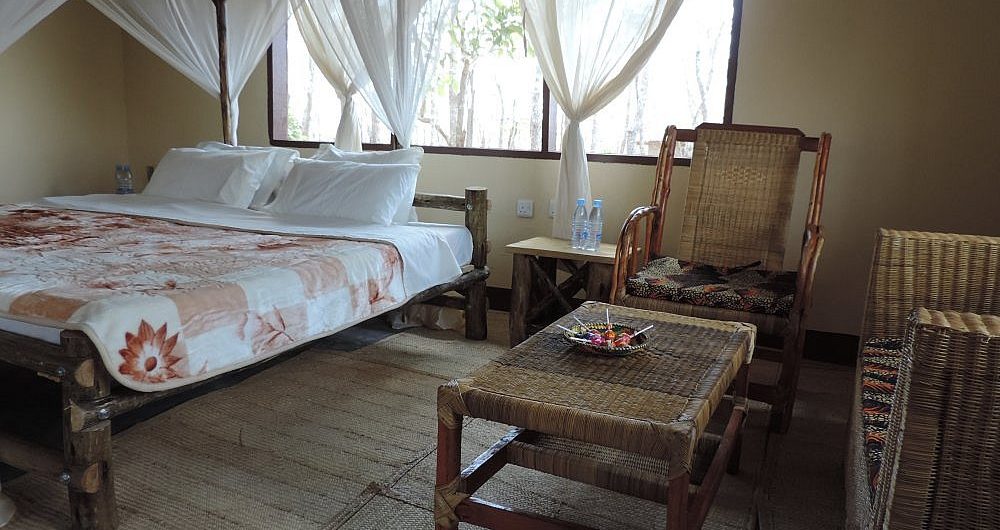 Mikumi Safari Lodge: 8 cottages with a raised balcony offering stunning views, integrated to the environment with total privacy, each fitted with warm and cold shower in a specious bathroom.
It is powered by solar with a standby generator for limited times.
Restaurant offers both Tanzanian and international meals made fresh from local products.
The bar offers a wide range of wines, spirits and soft drinks.

Camp Bastian: located outside the park & consists of 6 cottages and a camp site which has a private verandah and is decorated with locally made furniture and fabrics in order to keep an authentic atmosphere in the rooms.

The cottages can be configured as single, double, triple, quadruple or as a family from 5-8 people

The cottages and the campsite are all located within the unique and natural settings of Camp Bastian, so no matter which type of accommodation you choose, you will wake up listening to uninterrupted sounds of beetles, crickets and birds.

Enjoy local Tanzanian fresh food as the vegetable are grown in own garden.

The bar offers a wide range of wines, spirits and soft drinks.

Mikumi Wildlife Camp:  located in the heart of Mikumi National Park and within a few hundred metres of the main entrance gate.

The camp has 9 en-suite bandas, each of them  is large and well ventilated with large verandas. All bandas can accommodate four people, in two separate rooms, making it convenient and friendly for families.

The bandas, as well as the lounge, dinning-area and bar, overlook the well-attended waterholes in front of the camp.

The open-air restaurant looks out over these plains and give you the most wonderful panoramic views. And the bar is a wonderful place to sit and watch the sunset.

Numerous animals are seen regularly in close vicinity of the camp

Its Tanzania smallest park with area of 52 sq km, located on shores of Lake Tanganyika.

The area is heavily forested making it an unsuitable habitat for carnivore and safe for walking safari.

Birdwatchers will be richly rewarded as Gombe has 200 odd bird species range from the Iconic Fish Eagle to Jewel like Peters twin spots. 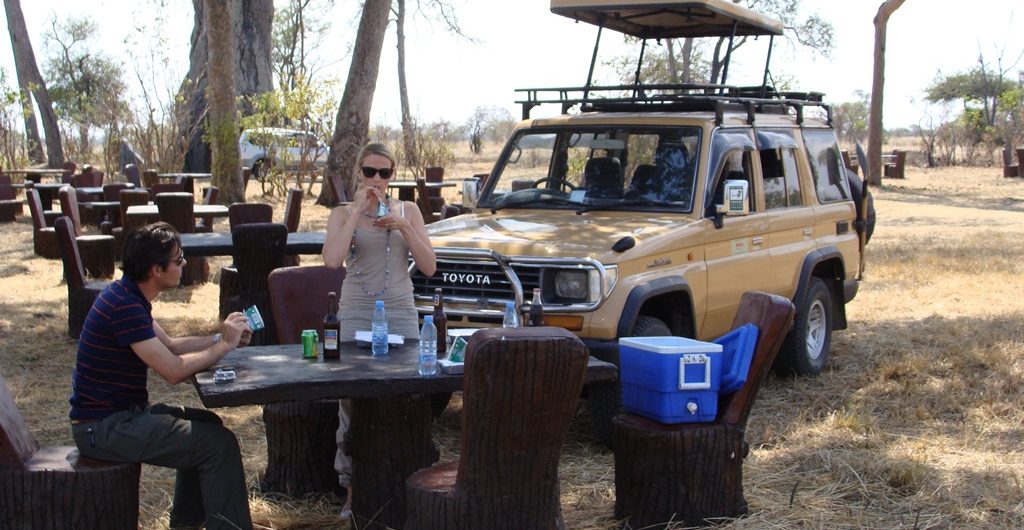 Mahale is sanctuary for Chimpanzee which has boundary with shore of Lake Tanganyika, the 2nd deepest & unpolluted Lake.

Home to some of Africa’s last remaining wild chimpanzees: a population of roughly 800 (only 60 individuals forming what is known as “M group”), habituated to human visitors by a Japanese research project founded in the 1960s.

Tracking the chimps of Mahale is a magical experience.

The guide’s eyes pick out last night’s nests – shadowy clumps high in a gallery of trees crowding the sky.

Butterflies flit in the dappled sunlight.

Lake Tanganyika is home for about 1,000 different species of fish.

Lake Katavi is located; with its vast flood plain the palm fringed Lake Chala and the Katuma River.

This park is home for elephants, buffalo, lion, hippo, crocodile, leopard, and zebra and antelope species like sable, topi, eland, impala and roan. More than 400 bird life species are found.

Isolated, untrammeled and seldom visited, Katavi is a true wilderness, providing the few intrepid souls who make it there with a thrilling taste of Africa as it must have been a century ago this during the dry season, when the floodwaters retreat, that Katavi truly comes into its own.

The Katuma, reduced to a shallow, muddy trickle, forms the only source of drinking water for miles around, and the flanking floodplains support game concentrations that defy belief.

An estimated 4,000 elephants might converge on the area, together with several herds of 1,000-plus buffalo, while an abundance of giraffe, zebra, impala and reedbuck provide easy pickings for the numerous lion prides and spotted hyena clans whose territories converge on the floodplains.

Katavi’s most singular wildlife spectacle is provided by its hippos. Towards the end of the dry season, up to 200 individuals might flop together in any riverine pool of sufficient depth. And as more hippos gather in one place, so does male rivalry heat up – bloody territorial fights are an everyday occurrence, with the vanquished male forced to lurk hapless on the open plains until it gathers sufficient confidence to mount another challenge.

At the point where the massive Pangani River empties itself into the Indian Ocean, a village has grown.

The Pangani River passes through the north side of the town, separating the old buildings and the present-day market from the farms and small houses on the south side.

The river itself requires a ferry to cross, its dark brown waters heavy with alluvial silt as it meanders slowly into the ocean. On either side of the little town, coconut palms and sisal plantations undulate towards the horizon.

Once a centre of Swahili trade with the African mainland, the town of Pangani is now a sleepy backwater that little remembers its days of splendors.

The old German administrative boma still stands behind a colonnade of tall shade trees and the former prison, painted a fading ocher red, looks over the river’s lazy waters.

Old houses along the main road offer lived-in examples of colonial and traditional Swahili architecture, the buildings slowly crumbling against the monsoon winds. Visitors passing through the area would do well to explore what remains of the old town on foot.

Even a short walk rewards visitors with a glimpse of quiet life in the old trading towns along the Swahili Coast.

Zanzibar evokes dreams of romance and mystery the reality will not disappoint the traveler bored mass tourism and seeking enlightening and enjoyable holiday.

Zanzibar is beach lovers’ paradise, with tranquil, warm tropical water and many miles of beautiful sandy beaches on the Indian Ocean.

Zanzibar’s colorfully history is a saga of travelers and traders, raiders and colonizers. To its shore came Sumerians, Assyrians, Egyptians, Phoenicians, Indians, Malays, Persians, Portuguese, Arabs, Dutch and British, each leaving behind the legacy of their stay.

Beit-el-ajaib (house of wonders) : built in 1883 by sultan Bargash and is the tallest building in stone town facing the sea with pillars fretted balconies and intricately carved doors.

Stone town: is the old city and cultural heart of Zanzibar, little changed in the last 200 yrs. It’s the place of winding alleys, bustling bazaars, mosques and grand Arabs houses whose extravagance is reflected in their brass-studded, carved wooden doors.

National Museum: collection of history and culture of Zanzibar.

Old Fort: site was established in the 16th century by Portuguese as trading depot and later erected as church.

Jozani Forest Reserve: located 35 kms south east from the city, with area of 10 sq kms, whose thick forest, with trees over 100 yrs old and with the last remaining of sanctuaries of the red colobus monkeys.

Changuu or Prison Island: was built in 1893 and was used to contain awkward slaves and a jail, but never used. Today the island famous inhabitants are giant tortoise and are popular place to swim, a stroll or a picnic.

Dolphin Tours: found at north of the island and chances of watching them is 85% in their natural habitant. The most commonly seen dolphins are bottled nose and spinner dolphins.

Suggested Itineraries for Zanzibar : Minimum 2 Days/ 1 Night or 5 days / 4 Nights : Zanzibar can be combined with other Parks :Check for Itineraries